For the badge icons I can offer some suggestions if you think that is timely (for example, in the form of svg images).

Thanks for the interest in helping. I’m opening this #clear-the-path:design topic for potential further discussion. @mray and @msiep are the folks doing this level of design. They could discuss with you either this specific idea, how you might contribute, or maybe if there are other ways you might contribute to design if interested (you seem to be thoughtful and interested in these things). Cheers!

I’ve been working on the shovel badges. Here are 2 alternate versions, at different sizes (64 -32 -16px). One looks better on small resolutions, while the other is more realistic. I kept the colors from the web site.

Don’t hesitate to convey your initial gut reactions (whatever they are), as well as reasoned comments.

I’ll have to do this in several posts: I’m told new users can only upload 1 file at a time…

I also did some work on the distinction between people still following the algorithm-set contribution and people having met their limit. This is to meet the concern voiced somewhere that people might feel concerned if they are keeping up with the set amount and everyone else is dropping out.

Note: as a “new user” I’m limited to 1 image per reply, and 3 replies per post. I guess this has to do with avoiding spam attacks… I also tried uploading a zip file, but that was barred too…

as a “new user” I’m limited to 1 image per reply, and 3 replies per post. I guess this has to do with avoiding spam attacks…

That is the purpose. I’ve gone ahead and upgraded you to trust level 1, which should remove the restriction. I’m a little surprised that didn’t happen automatically – the requirements to reach TL1 are fairly low (read 30 posts in 5 threads over 10 min).

Anyway, to recap the icon/badge thing:
Here are 2 alternatives for the shovel badge representing the user’s participation in the program. One is more realistic, the other scales down better to 16px size:

Don’t hesitate to convey your initial gut reactions (whatever they are), as well as reasoned comments.

I also did some work on the distinction between people still following the algorithm-set contribution and people having met their limit. This is to meet the concern voiced somewhere that people might feel concerned if they are keeping up with the set amount and everyone else is dropping out.

It would also be possible to combine those with the shovel icons above. They don’t scale down well below 32px

Here’s a diagram to explain the badges, and what happens when the project hits the limit. It attempts to answer people who would have the same initial reaction when reading https://snowdrift.coop/how-it-works, namely “hey, does this mean I get bowled out when I reach my limit?” 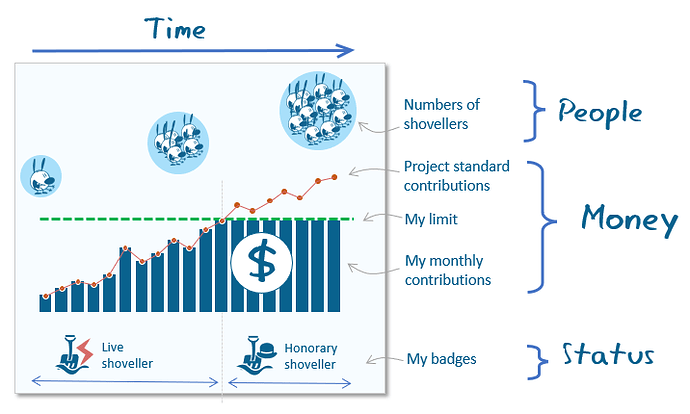 @fvila789 I’m not certain about what the desired badge-set needs to cover.
I see the use of a hat, star, clock and lightning as slightly problematic as they don’t seem to share a common icon system.

I suggest creating a relatively complete list of badges and their descriptions fist, eventually group them at that stage, and then think about a system that coherently works across all cases and easily is expandable in the future?

I’m not certain about what the desired badge-set needs to cover.

I’m not sure either (see my 2 cents at the end of this post). I picked up a number of issues of debate, I’m trying to suggest ideas to cover them:

So based on that info, the badges correspond to different stages:

the spark is for people who are currently giving at the suggested rate, who have not yet reached their limit, whose contribution increases when more people arrive. The red color symbolizes the “live” status.

the star is for people who chipped in an initial contribution to the project. We could call it a pioneer badge/ It’s red because I don’t know whether this is a valid option in the project or not. (latest thought: Pioneers and red stars might suggest the Soviet Union, maybe find other ideas).

=> Personally I’m not sure whether it’s a big deal or not that different people are giving different amounts. If it isn’t, then we don’t need the detailed icons/badges. Just one shovel (contributor) would do.

Looks like there are three badges on the table.

So all in all I think we should come up with a much larger amount of badges to have a realistic representation of what a bade icon system would have to achieve.

On the top of my head this could be possible contenders:

and so on, I bet there is much more. That list is what we should compile first and then see how icons can represent them. At least that would be my approach.

Upped my limit: indeed! You could get addicted to collecting those badges by upping the limit time and again, like pole vault champions who break the record at every venue by adding a couple of centimeters…

Honor people leaving projects: I wasn’t suggesting honoring people who stopped giving, the idea was more like a consolation prize for people who weren’t quite giving the algorithm-determined amount (what’s the official name for that, by the way?)

Support 1 project-support 2 projects: I think we can give 1 shovel per project

. Maybe we could also recognize somehow that the person joined the project when there was only a small number, and it grew to be so big. (“founding” member or something)

Exclusive badges that are not available to others: I imagine if someone wants to give a larger sum that would be welcomed, even if we weren’t in a fund-raising phase.

I only made suggestions, feel free to add or remove as many as you wish – my key notion was: compile a list, as complete as possible, then think about icons that can work with it.

I checked on the badge system of the crowd platform I’ve been using, namely Stackoverflow. I thought it had graphic badges but it turns out they use text, explained here: https://stackoverflow.com/help/badges .
So I’m wondering whether the work I’ve done on graphic badges is much use

Anyway, here are the graphics I’ve done up to now, in case they come to be useful.

the algorithm-determined amount (what’s the official name for that, by the way?)

The system is called Crowdmatching. The amount is called the crowdmatch level, if I remember correctly.

I checked on the badge system of the crowd platform I’ve been using, namely Stackoverflow. I thought it had graphic badges but it turns out they use text, explained here: https://stackoverflow.com/help/badges .
So I’m wondering whether the work I’ve done on graphic badges is much use

I don’t think we’ve discussed where these badges would appear, yet. One likely place is here on the forum. Discourse comes with a number of built in badges for using the forum regularly, but it’s possible to add custom badges and there’s an api for automatically granting/removing badges.

Yes, but it’s not straightforward to make various or multiple badges show next to users other than right at their direct profiles (which is still something and worth doing).

Decide how to use Groups, Badges, and Titles is relevant here.

I didn’t know about discourse’s icons, are they open source? I saw here they are subscription-based, I’m a bit confused about their status…

If this wasn’t a free software tool we’d probably not use it.

Yeah, we use only FLO software here as much as possible. Discourse’s prices are for hosting service and support. We self-host Discourse, and everything about it is FLO, no concerns there.

I’m hesitant to have us develop a lot of badge icons in advance because I think we’ll need to have a lot more patrons before we can get a good idea of what statuses it could be helpful to recognize with badges. Perhaps we could have a way of initially representing with text some statuses that we have under consideration for possible future “iconifying”. That would enable us to get input from patrons and adjust our ideas for each status before “setting it in stone” (or pixels anyway) as an icon.

My biggest takeaway from this discussion is that @fvila789 not only is willing to make badges for us when we get to that stage by also has the technical skill, and they look good too. I’d like the team to keep @fvila789 in mind for future design tasks etc if they are so inclined.