In preparing the final intro video, I got feedback from several people unfamiliar with us overall. They felt that showing the $ signs on the example animations that show very few total patrons made them think they were donating substantial amounts with only a few patrons.

One suggested that if we had a ¢ sign instead, it would capture the idea that each patron is not donating that much. Of course, the budget cut-off is more into the $ levels, so there’s no easy solution. 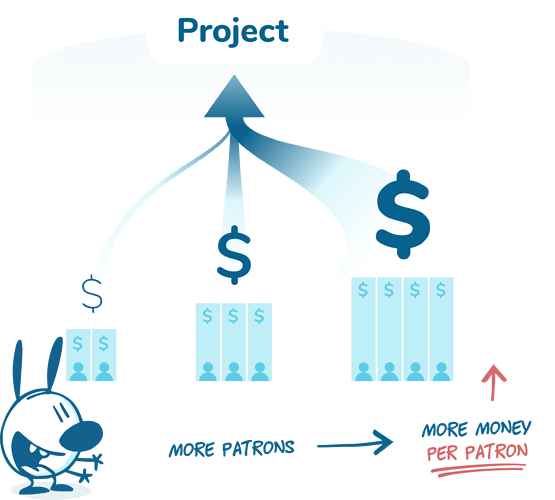 The dollars on each bar look like each patron is donating a lot, even at the first 2-patron part. If the bars had ¢ signs, there could still be $ above the bars so that it shows that cents from multiple patrons add up to dollars for the project…

The one timely question (particularly for @msiep and @mray): should we switch the similar part of the video to ¢ for now? While it can be done some later time (along with other improvements), we’re about to do a final rendering for now that will be the first widely public video, and this is a simple enough change. We could keep the $ on the big “crowdmatching” graph (with lots of patrons) but the ¢ on the section with few patrons and individual bars…[1]

Maybe eventually we can figure out some further nuanced ways to highlight the idea that each patron is not donating a lot but together it adds up. For example, maybe some sort of fade-to-nothing background with more bars that would imply that the squares we show are actually just a zoomed-in corner of a much larger square…

should we switch the similar part of the video to ¢ for now?

No, lets stick with $. It is a good representation of “money” and we should not even open up the possibility to eventually mean something depending on using ¢ vs. $ – it is the sum of height & amount of the bars that should “quantify” money.

Maybe in the final rendering of the video we could adjust the number/height of the bars to avoid giving the impression that people would be giving donations in the amount of dollars with only a few patrons? Or add a scale alongside to make it clear approximately how large the donations would be at that point?

Although future versions could have lots of tweaks and updates, we’re looking at the need to publish with only very easy changes. Some rendering glitches on newer system plus volunteer bandwidth issues mean that we can only afford pretty basic changes at this time.

I think removing any symbol from the bars might be the easiest way to avoid implying much about how much money we’re talking about.

Anyway, there may be some cultural differences here where some people see $ as just “money” generically while others see it as signifying dollars (and not just cents).

The issue that predicated this discussion is just anecdotal. I suggest putting the whole discussion aside until we have a functional system where you can see real project numbers. I suspect it will be pretty clear what’s going on, even if there’s the occasional moment of misunderstanding.

I do want the concern kept in mind though, especially as we continue improving the how-it-works page.

I’m in favor of leaving it as is for now. If we have no symbols on the bars it might become unclear that they represent money. If we switch to cents I’m concerned that’s not even a familiar enough symbol these days. How often do any of us see that symbol in normal life?