Introductory video is missing the point

I was watching the introductory video for the nth time and, although I really love the graphics (kudos to the designer), I find the narration is really missing the point.

First of all, what is said from 0:00 to 0:24 could be said of a lot of crowdfunding platforms (Tipeee, Liberapay, OpenCollective…) so it looks like SnowDrift is trying to address a problem that a lot of services have already dealt with.

I don’t see how the reference to advertisement applies either to music, research, and esp. free software where, I think, it is hardly every used.

What bothers me the most is what smichel17 reports from family members in a related thread:

And usually the more people join the less you pay. It’s unclear why it is the reverse.

I think the introductory video should make that point very clear.

And the analogy of
funding public goods = cooperation on a snowdrift
is not clear. The fact that we start with a road with ads and cameras make it more confusing again. The visual metaphor is too complicated for someone who doesn’t already know the chicken game and would be more understandable if translated into a explicit comparison, with the narration matching precisely what is displayed in the animation.

I would say something in that spirit:

A lot of us would like to contribute to public good. We would be eager to give to a beggar, a charity, a project we like, a free software we use, or a video creator whose videos we watch. But there is always this little voice in our head: am I being the sucker? Why would I donate my precious money? Imagine if you wanted to drive where a lot of snow has rendered the road impracticable. Would you clear it all by yourself? Or would you rather every driver to join forces and participate in the shoveling? States solve this problem through public taxation. Companies solve this problem by making the user pay in a form or another, either through paywalls, advertisement or selling user data. But what if you don’t want companies’ advertisements and paywalls, and the State isn’t interested in funding things you want, like free software development, ad-independent journalism, independent research, or DRM-free music? Are you doomed to choose between being a parasite free-rider and being a sucker? That’s where snowdrift.coop comes into play: you start shoveling just a little, and wait for others to join in to shovel more and clear the road completely. This way, each one shovels about the same amount, and no one feels they are taken advantage of.

When I discovered SnowDrift, it really reminded me of Cipolla’s 5 Basic Laws of Human Stupidity: 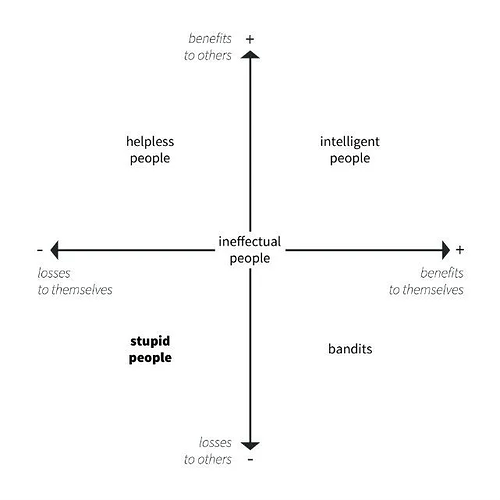 To me, SnowDrift could to make us fall in the “intelligent people” category.

This makes me think of the idiom:
“You scratch my back and I’ll scratch yours”
which in French would translate by:
“C’est donnant-donnant” (= Tit for tat)

I think that is what should be conveyed by the intro video.

Sorry for the French accent and pronunciation errors ^^

Not fully satisfied with the script ; it’s just a draft.

Maybe it would be useful to explain why other crowdfunding platforms don’t work for certain types of projects (to add to the “wrong solutions” sections of the copywriting formula).

Not satisfied with the transition from the metaphor of shoveling to what we are really talking about (donating).

Plus, I’m not convinced we can picture the “shovel a little” part (does that mean shovel slowly? or without enthusiasm?).

I agree the video has serious issues. You highlighted only some of them, and in my eyes the true problem is that the exact message we want to convey isn’t clear enough to our selves. As long as we know the mechanism needs an update (and there is no clarity about what will be) I personally won’t work on the video. But that’s only me.

the true problem is that the exact message we want to convey isn’t clear enough to our selves. As long as we know the mechanism needs an update (and there is no clarity about what will be)

I’m not sure I know what you refer to with “the mechanism”. Is this about the limits and start amount and such?

To me, the message could be more efficient if we talked about the way SnowDrift creates more motivation for everyone to participate in a public good project than other crowdfunding platforms. And talk about how some project might benefit from campaigns like Kickstarter, while for others Snowdrift is better suited.

I think the message would be more understandable if we put the emphasis on the difference between SnowDrift and other crowdfunding platforms, instead of talking of the could world WE would like to build. Because SnowDrift could be use to fund other stuff, like helping a beggar get back on its feet, or helping a poor village in Somalia, or any charity…

Snowdrift = “I give if you give” pact

To me, the precise mechanisms and parameters of Snowdrift don’t seem that relevant for the intro video. This might be developed in a second video or via text and images.

I think the intro video should focus on what makes Snowdrift special: the fact that it is deeply rooted in the psychology of motivation.

I see a lot of similarity between Snowdrift and the French streamers strategy on r/place 2022. French people were motivated to stay up all night to make the individually boring and ungratifying act of clicking a pixel every 5 minutes, because Kamet0, Fukano and ZeratoR synchronized them, which made the picture change radically in 15 seconds, and gave to each follower the impression that they had a real impact on what happened, an impact way beyond what their individual act could accomplish.

Snowdrift = “your contribution matters more (than on other crowdfunding platforms)”

I’ve learned recently that French streamers use the same strategy during the zEvent (a yearly game streaming event that raised 10M€ for charity last year): they create “1€ raids” : punctually, they ask each follower of the event to give 1€, and they thus manage to reach a new floor, and each one feels they are part of the reason the floor was reached.

I’m not sure I know what you refer to with “the mechanism”. Is this about the limits and start amount and such?

Yes. “Mechanism” is the the part that decides what EXACTLY happens as the consequence of peoples actions on the platform.

To me, the precise mechanisms and parameters of Snowdrift don’t seem that relevant for the intro video.

To me it very much is. This is why:

We need to make clear how to use that tool.
More instruction manual, less utopia.

Unfortunately it is very hard to write a great or even a superb instruction manual when all you have is a prototype that is subject to change.

I agree with the idea that the intro video needs not talk about utopia, because like you say Snowdrift is a tool, and it could be used for a great variety of purposes, some of which one might not consider participating in their definition of what constitutes “good”. Generally, crowdfunding platforms have rules and guidelines to censor what the founders don’t consider “good”, but this is very subjective. We had the case in France with Leetchi censoring a crowdfunding to help a protester who had an altercation with the riot squad get a lawyer.

On the other hand, it’s more efficient in general to talk about benefits than features.

A common saying in marketing is:

And this is the major difference we see between great copywritting done by marketers in private companies and poorly written websites when they are created by developers (which is typical in the FOSS world). Exception might be made for the sites of softwares aimed at developers and frameworks and libraries, because developers seem to have the superhuman ability to deduce the benefits from the features.

On the other hand, it’s more efficient in general to talk about benefits than features.

In general, maybe. But I think there is no doubt about the “benefit” of giving money. We don’t even have any “features” to brag about. A robust understanding of the very mechanism in place makes all the difference.

But maybe I’m misunderstanding what “benefits” you have in mind “sell”?
Arguably the mechanism IS the benefit, but that would also make my point: we can’t sell what we don’t know.

The logical target of the homepage is people who want to get more money for their project.

The benefit for them is getting more money.

This would be the main point of the video : when you use SnowDrift.coop to fund a project, you raise more money than with other crowdfunding platforms.

The mechanism (crowdmatching) is the means to the benefit (get a project funded, raise more money).