Projects can have multiple goals defined at the same time. The next bigger goal is the current goal that is used to calculate funded%.

So a project is encouraged to have many goals. That makes the funding transparent to the patrons.

A project has these goals defined:

The patrons pledge to contribute 2491$ max together (number from https://random.org/).

The project loses patrons and the remaining pledge is just 2000$ (slightly over the previous goal).

When the project drops below the previous goal, so pledge is 1800:

That is more than before! Also not good.

So a good time to activate a higher goal (or change the goal in the case of having just one) might be when the project would actually get more money. That seems never to be the case, because 100% of the pledge is the best you can get. So a projects stays on the lowest goal, but have eliminated the crowdmatching effect. Visitors have not more incentive as on patreon. 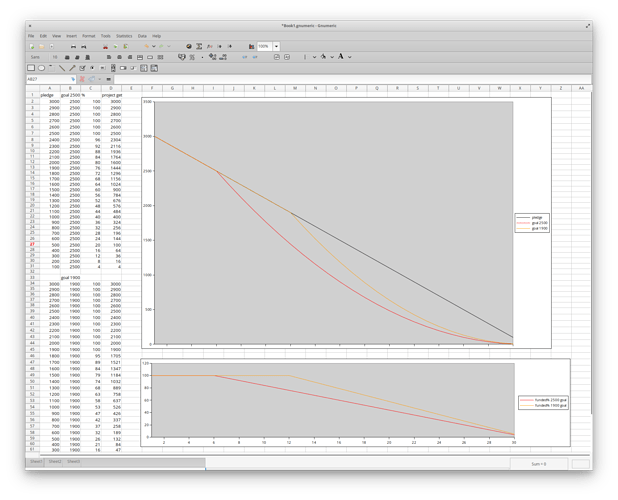 So in the end, the project invests in more patrons by giving up on %. It seems really a bet as in the stock market.

The question is, how much % gives you the most new patrons. And them you would want to stay on that. Adjust the goal every time a new patron joins.

In the end, this idea topic is again about the dynamics of changing the goal.

This is a similar idea to Funding milestones

They don’t, though! If you can automatically drop below it, I wouldn’t call that a save point. But what if you couldn’t drop below it? That seems to me to be the obvious fix for the “bad” scenarios you pointed out.

So, give the project 100% of the goal they already surpassed ($2500), plus the proportional amount (as usual) of the progress to the next goal.

I haven’t spent enough time thinking through this idea to say anything with certainty[1], but it looks like my proposal here might just be a better version of it?

[1] Restrict patrons to common goals.[2] Instead of picking any number, they’d only be able to pledge @ 1000, 2000, or 3000. Yellow and blue would shift to 1000, and otherwise the system would stay the same. No more complex evaluations — you know that you’re being matched by anybody who pledged to your goal or higher.[3] edit: although some of this is lost with (3); how complex it gets depends on…

Are the similar enough that you could adjust your spreadsheet to that formula?