I’m Boris, soon to 32 years old. I live in the far west of Eurasia. My mother tongue is French.

First of all, let me say I’m just socked.

Shocked that I didn’t hear about Snowdrift.coop years ago.

Shocked that I didn’t even know the snowdrift game. I studied a bit of economics and game theory when I was in high school. I knew about the prisoners dilemma and the free-rider problem (plus Nicky Case refreshed my memory on those concepts most recently), but I didn’t know about the game of chicken, so thanks for that!

I’ve been interested in FOSS since I was 15 yo and learnt programming. I went to study computer science at the university, stayed there a year and a half, and left when I heard a teacher say “we now have to industrialize the processes”. I felt despair thinking that getting the diploma would eventually lead me to produce proprietary software, with no consideration whatsoever for the common good, so I left.

I then taught website creation to small business owners (had to pay the bills) and learnt some marketing concepts along the way.

Still thinking about Free Software and ways to fund it, I had the same analysis as yours (at least one half of it) : we don’t donate when we think our impact will be small.

So I suggested on FramaColibri (Framasoft forums ; Framasoft is the association that funded PeerTube) that we give users the opportunity to fund specific features of a project. Just like feature bounties on LaunchPad, but aimed more towards the general public, with a nice user interface. At the time, I thought about something looking like this : 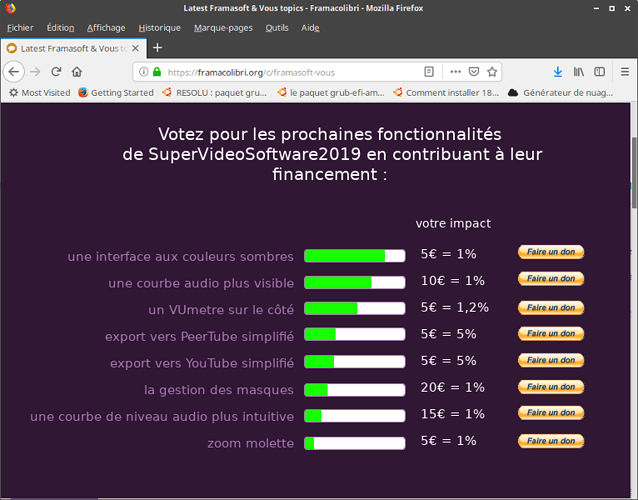 It didn’t get much echo, but in a reply to my post, I was told about the Relative Theory of Money, libre currencies, Ğ1, Duniter, Cesium and Ğchange. I jumped right into this rabbit hole and contributed by improving websites, communication, the UX/UI of a Duniter client, etc.

But progress on this project felt too slow for me. There is a religion of bootstrapping and dogfooding among the Duniter community. They don’t want to accept debt money (such as €) and the whole project relies on soon-to-burn-out contributors. That was about the time I read Pieter Hintjens’ Social Architecture

Then I left and went to live in a forest-garden, which is supposed to give us the food, water, electricity (#solarpunk) and time we need to code.

Then, a few days ago, as I was ruminating about the lack of good music creation tools on GNU+Linux, I googled “linux music crowdfunding” and stumbled an article in Linux Magazine (it was the 4th result).

This is how I got there and I want to help, because I think Snowdrift has the potential to be a game changer for both FOSS and the commons in general.

How I can help

Projects I most want to see funded through Snowdrift.coop

Thanks Boris, what a great overview intro welcome post!

I think getting Framasoft people really aware of what we’re trying to do would be very helpful. We don’t have direct connection with them for whatever reason.

At the moment, our progress is really slow, and we’re trying to figure out what is the path to where our vision becomes a real thing that can make a difference in the world. An updated view of our general ideas is in progress, and the newest publication that describes the framing we’re going towards is from my LibrePlanet talk from a few months ago: Why our economy fails public goods like free software - Framatube

Thanks for the warm welcome.

I had already watched the video. Great talk by the way. Loved the explanation of “bootstrapping”.

I do struggle to see where SnowDrift is at the moment. I’ve read your July 2021 blog post and it looked that you were facing both technical challenges and social discussions. How has that evolved since then?

There is something I don’t understand: you imply at 29:21 in your talk that SnowDrift isn’t fully robust, but it seems to already work. The website is already great (or “great enough” if you want to stay modest ^^). Why not shout it from the rooftops until you get enough patrons to pay a developer or two and solve, at least, the technical issues? This project will probably benefit a lot to all of the free software community and all of free software developers. We should make it a priority to get it funded.

The forest-garden sounds interesting. Are you still living there?

But progress on this project felt too slow for me. […] They don’t want to accept debt money

I regret to inform you we may be in the same boat.

We are opposed to taking venture capital or other investment-type money that would likely compromise our priorities when the investors come looking for returns. But we’re not opposed to taking money in the form of donations, grants, contracts (paying us to build a specific feature), etc. The opposite, actually— we welcome all help in getting, financial or otherwise, in getting off the ground. We’ve had some funding in the past, which been key to the progress we have made so far— see our accounting page. Progress is also slower because of our choice to use exclusively FLO tools (with one exception: gitlab.com, that we’re unhappy with).

I like our choices here, but I’m not totally certain that they are the best choices to achieve the goals of the project (avoiding VC: probably the right choice. proprietary software: maybe a compromise we need to make to avoid the pitfalls of bootstrapping).

Speaking of goals, we recently identified that ours are not clear enough. We have a mission/vision page, but it’s not specific enough to answer questions like whether using proprietary software (only when there’s not a good FLO alternative) would compromise our mission, or what scale we would need to reach to consider the crowdmatching project a success, which affects our design & engineering choices.

you imply at 29:21 in your talk that SnowDrift isn’t fully robust, but it seems to already work.

The site has been in almost the same state since the start of 2017. You can:

In theory we also have code that will do the payout, but this has not been tested, especially handling failure modes like expired cards (a likely problem, since our earliest patrons pledged over 4 years ago).

There is frustratingly little left to do to be fully functional, but unfortunately the site is written in Haskell and nobody on the team has Haskell expertise.[1] We did finally decide on a plan for moving to a different tech stack (still tbd). This post gives an overview (light on technical details; I plan to write a follow-up that focuses on the technical side):

Plan for Moving Off Haskell (Part 1): Overview Clearing the Path

Context: We Need to Move Off Haskell Since 2017, lack of Haskell expertise in the core team has been a blocker to making development progress. For a while, we hoped to find a new contributor, who could help us complete the little work that remains to get the site launch ready. That hasn’t happened, and perhaps was unlikely to begin with: @Salt came across some research (I will find/add the link later) which found that, excluding developers scratching their own itch, most volunteer FLO software …

Although the website has been stagnant, have made other progress, which is less visible: we finished our legal incorporation and settled on an easier-to-explain framing for crowdmatching using a goal instead of a limit… although we have not settled on all the details yet, and it is not currently reflected on the site— part of why we’re not doing much publicity.

There was a little more I was going to say about how making more connections with other people in the space (e.g. FramaSoft) would be valuable, but this is long already, so I’ll leave it here.

FWIW, although many of us helped, what makes Snowdrift.coop itself at least not fall into some of the anti-patterns you identified is the design work led by @mray (with involvement from me, @msiep , and some input from others). At this point, the primary reason we haven’t further fixed and improved everything and gotten launched is just the lack of dedicated and coordinated time from design and coding (coding being the greater bottleneck at this point as @smichel17 mentioned). But if we can get past our rut, you seem to have great perspectives, and I’d love to get your take on decisions we need to make to get a real launch-worthy site in place.

Here is the trailer ^^

Are you still living there?

I left a few weeks ago ; had to take a break from people. I might go back in September.

Yeah I discovered it via your talk

FWIW, although many of us helped, what makes Snowdrift.coop itself at least not fall into some of the anti-patterns you identified is the design work led by @mray (with involvement from me, @msiep , and some input from others). At this point, the primary reason we haven’t further fixed and improved everything and gotten launched is just the lack of dedicated and coordinated time from design and coding (coding being the greater bottleneck at this point as @smichel17 mentioned). But if we can get past our rut, you seem to have great perspectives, and I’d love to get your take on decisions we need to make to get a real launch-worthy site in place.

There was a little more I was going to say about how making more connections with other people in the space (e.g. FramaSoft) would be valuable, but this is long already, so I’ll leave it here.

Yes, the website is quite good indeed, comparing to other FOSS projects.

Still: improving the homepage a slight more, get FOSS enthusiasts to come visit it, and explicitly say somewhere “looking for haskell developer” might help clear the path quicker.

Thanks for all your deeply relevant and insightful thoughts you’re sharing here. It’s great to get these perspectives and active suggestions! This might well be the best format for the long-form things you’re bringing up, but you are invited to join us on Matrix and to attend our Mumble weekly meetings and other hang-outs if it happens to be good. You are remarkably thorough in your understanding of the topics that apply to our work, and you might just be making a real difference in helping us get through the current stagnation. Thank you so much for coming here and joining us!

Matrix and our Mumble weekly meetings

…if you would prefer. I think there’s also real value in corresponding primarily here, where conversations are recorded/catalogued by default rather than needing to be copied somewhere else in order to be preserved. As a pertinent example, I don’t think you’d have been able to engage as effectively with our meeting notes as by replying to posts here (and now your excellent comments are also preserved for the next person who comes along).

Agreed, as I mentioned in Using Discourse for more institutional-memory vs Matrix or email