Continuing the discussion from Introductory video is missing the point:

Introductory video is missing the point

And this is the major difference we see between great copywritting done by marketers in private companies and poorly written websites when they are created by developers (which is typical in the FOSS world). Exception might be made for the sites of softwares aimed at developers and frameworks and libraries, because developers seem to have the superhuman ability to deduce the benefits from the features.

I have no data to back up this hypothesizing, but I suspect this group is larger than just developers.

If you gave any number of modern power tools to a medieval carpenter and explained just the basics of operation, I bet they’d figure out the usefulness pretty quickly. Or a new instrument to a musician. Or Sun Tzu a machine gun.

I wonder if there’s some connection here to the discussion of convivial/anticonvivial tools. The three examples I just gave, and any others I could think of, were all people who would engage with the tools creatively.

If you gave any number of modern power tools to a medieval carpenter and explained just the basics of operation, I bet they’d figure out the usefulness pretty quickly. Or a new instrument to a musician. Or Sun Tzu a machine gun.

Yes, I think you are right. When something is your trade, you understand way more quickly the use you can make of a tool. I think it also has to do with whom you are addressing:

For example, I have seen the “What is…” formula not only in free software tools but also on a packet of red lentils, which is something typically bought by explorers of the culinary and organic worlds.

I would guess that it’s not about whether people can figure out the benefits, but whether they can be arsed to.

I think it’s both. But those two are linked. When you have an intrinsic interest in something, it’s not an effort to figure things out ; it’s play rather than work.

Perhaps because they don’t realize the tool is applicable to their problem.

Digression: this makes me think of the XY problem.

I wonder if there’s some connection here to the discussion of convivial/anticonvivial tools.

Although Illich talks a bit about computers in Deschooling Society, I don’t think computers were widespread enough in the 1970s for him to integrate them to his reflections in Tools for Conviviality (1973).

But we could try to think about it. To me, both the UX/UI design of a software and how the website introduces the software have an impact on whether a software is convivial or anticonvivial. An I think a lot of free software are not, also in part because most developers love complexity (and that is one of the reasons they went to software dev in the first place), an can put up with complex dashboards and a feature-rich interface in which most people would be lost.

I forgot why I wanted to mention this, but have you heard about Norman doors?

Perhaps they don’t realize they have a problem.

When you suffer from a situation, you generally know it. I think what is more likely is that people don’t realize a problem has a solution. But you could make the distinction between problem (something that can be solve) and circumstance (something you just have to put up with). So we could say we sometimes mistake problems for circumstances (and vice-versa).

Marketing generally tries to understand the needs of people (which do exist), and talks about them. What is subject to debate is whether the solution is a good one (or the best one).

Here is a good video that makes a pretty compelling argument in a sensible way, taking 3 examples, a computer, a piano, and a mileage card:

Copywriting: Features VS Benefits – Which is better?? 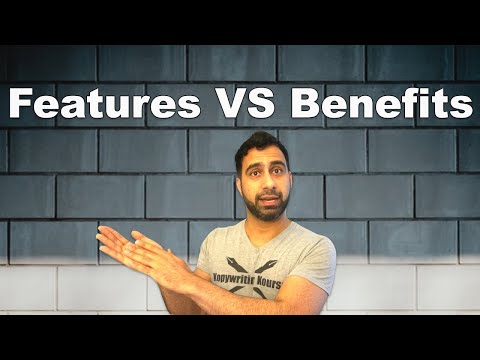 You can sell this computer to a technical person because they already know what the benefits are.

Marketing generally tries to understand the needs of people (which do exist), and talks about them.