Adding a reason why you flagged posts

I flagged the linked comment as off-topic, since the thread is geared towards discussion of how the budget should function for alpha, which isn’t going to change away from the strategy of dropping pledges. That makes the discussion @CANAWEN is looking to have post-alpha, which I think should happen in a different thread (especially since the current one is so long already).

I would like to have included ^that rationale along with my flag, but that seems not to be possible. Or is it? With a plugin?

You unknowingly answered your own question:

More on flagging: @chreekat replied on this topic when he meant to reply on the linked one. Someone else (correctly) flagged it as off-topic. I also flagged it, and hit the ‘take action’ button (a moderator action, I think) instead of just flagging (as a user). Now I think it’s hidden, but it displays in a very confusing way: 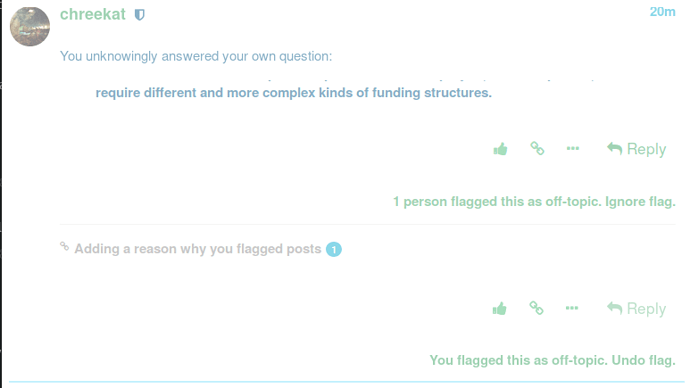 I’m not sure why there are two sets of {agree, share, edit, …, reply} buttons. The bottom ones are clickable; the top are not.

I don’t understand. I meant to reply here. I included a screenshot showing that you can include a reason for a flag by starting a new topic, linked to the item in question. Instead of naming your new topic ‘Adding a reason why you flagged posts’, you can name it ‘Flagged off-topic because XYZ’. This is just a suggested convention, of course.

OOOOH, You had a screenshot in your post! The alignment was such that it looked liked “require different and more complex kinds of funding structures” was actually part of your comment, and you were replying to @CANAWEN.

I often wrap my own screenshots in quotes to alleviate this issue (I didn’t above since there was the black line to the left).

For some reason, my image shows as an image when I mouse over it, but yours shows as part of the body of the post. This is very difficult for me to screenshot, maybe I’ll try to get a screen recording…

This is why I was confused:

You unknowingly answered your own question:

I don’t think ‘reply in new thread’ is a great solution because:

Related: I want to figure out how to edit the form-letter text as in https://community.snowdrift.coop/t/post-hidden-by-community-flags/500

ideally as @smichel17 emphasizes, we could add our own arbitrary text when flagging and it would show there (and not just as some new public topic to discuss). But we should optimize the default text as well.

For example, in the case of “off-topic” specifically, we should emphasize the reply-as-new-topic option over the option (that can still be mentioned) of editing and reposting.

Also, the ideal for “reason why you flagged posts” would be a series of checkboxes that list the items from our Code of Conduct along with the ability to add arbitrary text explaining the concern and that arbitrary text should have the option of being shown to the poster anonymously.

Note that there is a close option already to specifically message the poster privately (all this stuff, flagging process in all regards should be private).

I do not have permission to view that thread, and I’m a moderator. I just get:

system [not from a regular user]

This is an automated message from Snowdrift.coop Community Discussions to let you know that your post was hidden.

Your post was flagged as off-topic: the community feels it is not a good fit for the topic, as currently defined by the title and the first post.

Multiple community members flagged this post before it was hidden, so please consider how you might revise your post to reflect their feedback. You can edit your post after 10 minutes, and it will be automatically unhidden.

However, if the post is hidden by the community a second time, it will remain hidden until handled by staff.

For additional guidance, please refer to our community guidelines.

That seems to be a moderation message that was sent to @CANAWEN as a result of someone (you? maybe that’s why you can see it? or maybe just b/c you’re an admin) confirming the flag on the linked comment.

yes, this is the form-message that user sees when their post is hidden because of flagging as off-topic.

Opened an ops issue for this stuff: https://git.snowdrift.coop/sd/ops/issues/9